Female heroes and female villains. I feel like I grew up reading them, and sharing their stories. But did I really?

I read threads in YA Facebook groups with interest, keeping in touch with what books are popular at the moment, what YA readers like in the books they read and what they don’t. Often there are passionately opposing viewpoints, some hate what others love. It’s been so good to find this: it’s good preparation for when I get some awful reviews, or if I sell enough books to find my stories the topic of a thread one day, knowing from what I’ve learned that some will hate and some will also love what I’ve written. But the one thing that comes up again and again, are requests for recommendations for books with strong female leads.

How strong female leads should behave is just a polarising as the books themselves – some hate certain traits that others love. But readers want to see the female characters that essentially carry them or even represent them through each book as strong. Like I said, I thought most of the female characters in the books I read growing up were strong. All of them had to overcome change and loss, navigating difficult or heartbreaking circumstances to ultimately triumph over whatever obstacle they faced.

If you’ve read any of my blogs, you may know I had a bit of an addiction to old fairy tales. To me, they were cram-packed with strong female leads. Yes, there was a wealth of handsome Princes or seventh sons overcoming insurmountable odds and winning the hand of fair maidens, usually in need of rescuing. But the stories I really remember and loved the most were the ones where a brave, clever girl outwitted the villain and showed extraordinary intelligence and courage. Frequently the villain was female too, but that is a topic for another day! One of my favorite fairy tales was The Necklace of Princess Fiorimonde by Mary de Morgan. I re-read it tonight ahead of writing this blog and was surprised to realize that the villain (Princess Fiorimonde) had ultimately been defeated by the male servant of one of Princess Fiorimonde’s victims. I had only remembered Yolande, the clever and brave maid of the wicked Princess, who was undeceived, who solved the mystery and instigated the defeat of the villain. I remembered this story as having two strong female leads, one brave and wicked, and one brave and good. Is heroine in the eye of the beholder?

I was quite a fearful child with a vivid imagination. Each time one of the female heroes won the day I saw a potential map I could follow to safety. If the worst ever happened, and I often felt it would, then I too could use my wits and summon the courage to escape, saving my own life and maybe even winning treasure or the heart of a handsome lad. Half the battle is belief, after all.

In my own first novel Find Me, writing a strong female lead didn’t come as organically as I assumed it would. I had been more influenced by the ‘girl needs rescuing’ scenario than I realized, and in my fairy tale-inspired storyline I was initially following not the clever girl rescues herself plotline, but the handsome Prince rescues the damsel in distress plot line. It took some re-thinking and re-imagining and of course re-writing to pass important power back to Skye, while remaining true to her character.

In my world, and that of my friends, strong women are people who turn up to difficult jobs with a smile and diligent determination, who cope with or support others with physical or mental health battles, emotional or financial struggles, who endlessly look for ways to improve their lives, and for ways to be kind to others. It’s a bit different in YA fantasy, but I hope the spirit of strength remains the same. Being the heroine won’t look the same in every book. Find Me is magical realism, which means a story set in what is essentially the world we know, but where magic exists in some form. In Find Me the magic is in the form of Hunter and his ocean-imprisoned clan, and where the love that grows between him and Skye leads. There will be some readers who object to how my heroine faces and overcomes her obstacles. But I hope that I’ve created a map of inspiration of some sort for my readers, to imagine a way through or over or around some of the obstacles they may be facing in their lives, or that they fear could be lying in wait. And I hope that Skye carries them through the story as an entertainingly worthy female lead.

If you would like to receive a newsletter about new books or offers, click on the link here. You can unsubscribe at any time 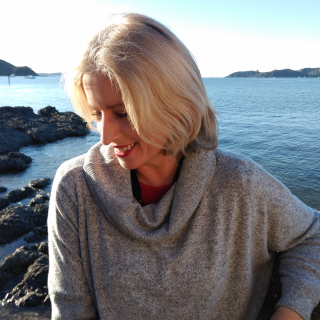